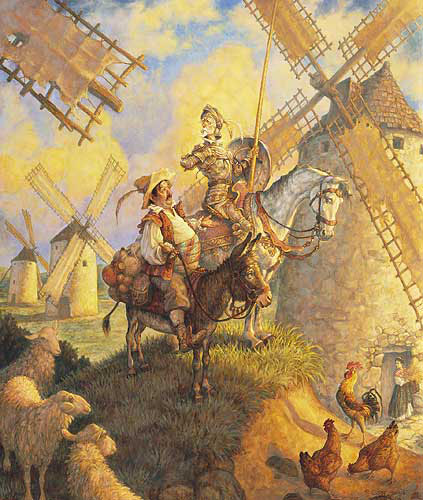 Renowned for his paintings inspired from children’s literature, Gustafson turns this time to a classic of adult fiction, Cervantes’ Don Quixote. Scott has interpreted the famous "tilting at windmills" passage when Quixote declares to his servant Sancho that he will do battle with the many-armed giant.

"Cervantes made Quixote a figure both ridiculous and admirable," Scott says, "and I’ve tried to capture both those qualities. The scrawny rooster on the lower right represents Quixote’s foolish, macho intention to impress the lady in his life. At the same time, I’ve set the scene at sunset, suggesting we’re seeing the last shining moments of chivalry."

Is Quixote the only one who experiences flights of fancy? Look closely at one of the clouds in the distance, and you just might see the outlines of a giant wielding a club.