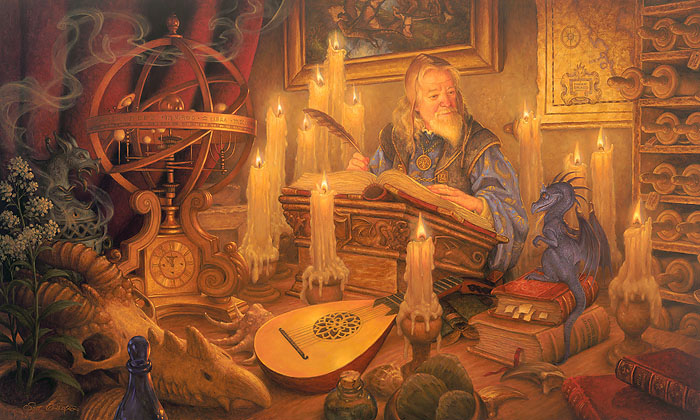 "The Dragon's Tale" by Scott Gustafson

In The Dragon’s Tale, artist Scott Gustafson imagines this creature might be last surviving dragon, telling his tale to a wizard who is the keeper of all dragon knowledge. With infinite patience, deep into the night, he records the dragon’s history. Dragons are ubiquitous in mythology around the world, sometimes evil, sometimes good and sometimes misunderstood gentle giants. They are often associated with wisdom and longevity so the scribe and his little friend will be together for a good long while.

Observant fans of Gustafson’s work will recognize this diminutive dragon from high in a tree branch in Gustafson’s 2009 Fine Art Canvas, A Confabulation of Dragons (Sold Out at Publisher). The wizard’s study is filled with dragon decor such as the skull, the scales in the bowl, dragon claws and the incense burner. That’s a meadowsweet plant in the left corner, which is thought to have been sacred to the Druids and featured in Welsh folklore. And so the dragon spins out his stories, a millennium of adventures, triumphs and sorrows and the wizard commits them to the written word and eternal life. Own a piece of dragon lore and décor with this spectacular new release from Scott Gustafson.